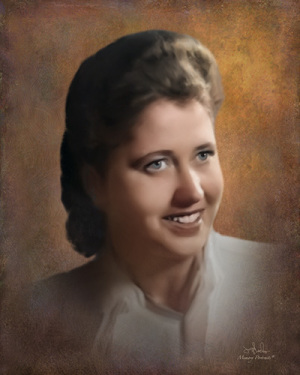 Balbina “Bobbie” Lesniak Reed, age 99 of Temple, passed away Friday, January 1, 2021 at a facility in Waco. Services will be Tuesday, January 12, 2021, at St. Mary Catholic Church in Temple; visitation will begin at 10 am; rosary recited at 10:30 am, and Mass of Christian Burial will follow at 11 am. Burial will be in Ft. Sam Houston National Cemetery in San Antonio, TX at 9 am Wednesday, January 13, 2021.

Bobbie was born on January 28, 1921 to Stanislav and Sophia Lesniak in Osobnica, Poland. She was the second of nine children. Wanting to continue her education, she would walk 7 kilometers to school in Jaslo, Poland. This continued until the invasion of Poland where she was placed in a work camp where she was able to learn several different languages. Liberated during the war, she went to Nuremburg, Germany and worked at the consulate as an interpreter for displaced persons and the USO. There she met her husband, William Deward Reed, a young soldier in 1946. In 1947, they travelled back to the United States on the bride ship USS Thomas H. Barry along with their oldest son, Stanley B. Reed. After a short time in Alabama, they moved to Texas where the family remained and grew. Bobbie had many jobs from the Chief Drive-in in Austin to finally owning two restaurants in the Austin area, Parr Burger and Capital Grill. Also, during that time, she raised three children while her husband was deployed. She was a devout Catholic, a member of St. Louis King of France Catholic Church since 1958, then moving back to St. Mary Catholic Church in Temple in 2004. At 4’8”, she was a true force of nature, stern but one of the funniest, happiest people you would ever run into.

Bobbie is preceded in death by her parents; husband; siblings; and so many wonderful friends through the years.

Those left to honor her memory are her sons, Stanley, and Robert (Bob) of Temple; daughter, Barbara DuBois Mincey of Temple; 8 grandchildren; and numerous great-grandchildren.

The Reed family would like to give special thanks to Brookdale Western Hills, Baylor Scott and White Hospice and Wesley Woods Rehab in Waco for the wonderful, loving care that they provided.

Condolences may be sent to the family online at HARPERTALASEK.COM

In lieu of flowers, we ask that contributions be made to Baylor Scott and White Hospice or the charity of your choice.

To send flowers to the family or plant a tree in memory of Balbina "Bobbie" (Lesniak) Reed, please visit our floral store.