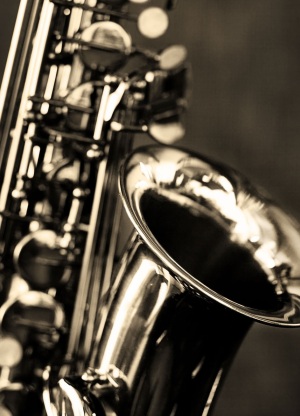 Born in Hillsboro, TX in 1924, Aubra grew up there where his father operated the Club Barbershop downtown. Growing up in the Great Depression shaped the rest of his life view to some degree. His mother introduced him to music at a young age, and he became a prodigy on the saxophone in high school. He left high school when he was 17 to join the Army Air Corps. He served in WWII on Guam in General Armstrong's 315 Bomb Wing. He played saxophone in the camp orchestra and was the young star soloist in the company of older professional musicians. Taking almost a year to get home after the war ended, he was offered several opportunities to play with the traveling big bands of the day, but life on the road was not for him. He married Cloris Walker in 1947 in Waco where they settled soon after. He made his livelihood playing jazz clubs and working at music stores including bookkeeping, sales, and instrument repair. He finished his career working for the federal government. His hobbies were fishing, golf, gardening, and old Mustangs. His main passion remained the sax, which he continued to play into his 90's. When he was 82, we put him on YouTube where he made many videos and acquired thousands of fans all over the world. Here's a sample-- https://www.youtube.com/watch?v=gFlQmB04xRU.

He and Cloris were together for 70 years. She was his inspiration. He is preceded in death by wife, Cloris, his parents, J.A. and Flossie Graves and sister Quida Crow. He is survived by son, Steve Graves and wife, Jana Kaay of Austin, daughter, Sarah Graves of Waco, and son, James Graves of Lorena, granddaughter Emily Graves and husband James Horne of Alexandria Virginia, and grandson, Nathan Franks of Waco, plus many nieces and nephews.

Musically, he was a once in a lifetime talent and a pro's pro, first takes all the way. The tone and essence he transmitted were his alone and will live on with every listener for years to come.  He was a faithful Christian who put all of his trust in Jesus Christ. He will be remembered and missed by all.

A graveside service will be held at 11 am Friday, July 24, 2020 at Waco Memorial Park with Wayne Williams officiating.

To send flowers to the family or plant a tree in memory of Aubra Joseph Graves, Jr., please visit our floral store.